Today's blog is about an "Ah ha" moment -- the kind of moment where something just clicks. You suddenly understand a concept that didn't make a lot of sense to you before.

Here's a pic I took of Samuel having an "Ah ha" moment. (Actually, to be completely honest -- I only lie when I am writing FICTION -- it's a photo taken a few seconds after the "Ah ha" moment, but I asked Samuel to do his best to replicate his "Ah ha" expression and hand gesture). 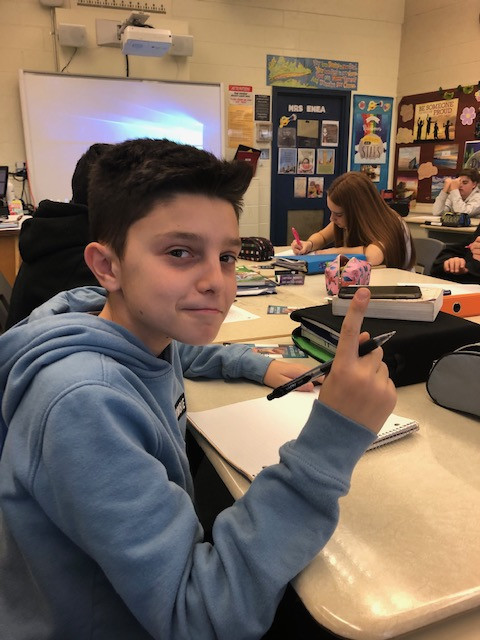 You will be wondering of course what Samuel was ah-ha-ing about. I'm just getting to that!

I was at Rosemere High School this morning to work with two groups of enriched English students. Samuel was in the first group -- their teacher is Miss Enea. I had asked the students to write about a memory from when they were ten years old. I told them they didn't have to let me read it because I know that sometimes these memories feel too private to share. When I walked past Samuel, he was hiding the paragraph he'd written. So I explained that there are creative ways to take difficult personal material and transform it into literature. "Why not," I suggested, "make whatever happened to you happen to someone else -- a kid who isns't named Samuel, who isn't in Sec. II at Rosemere High?" -- that's when Samuel had his "Ah ha" moment. It was also a happy moment in my happy day today.

Miss Enea explained that not all the students in her class were enriched. And though I'm not supposed to have favourites, I found one today -- Tommy, a lively young man who told me he wasn't in the enriched stream. But when I finished my workshop, he stopped to say, "You enriched me!" Hey Tommy, you enriched me! I never had a son, but I think if I had one, I'd have liked him to be like Tommy!

After recess, I visited Ms. Fazia's Sec. I's. They were quiet at first, but wow, were they ever focused! I gave them a writing exercise I usually only use with CEGEP students: to write about the hardest thing they've ever gone through. Somehow, I felt that these students could handle the topic. On my drive home, I was thinking I should also have asked them to describe HOW THEY GOT THROUGH THEIR MOST DIFFICULT MOMENT. (So Miss Fazia, if you're reading this -- tell them to add a paragraph for me.)

While the students were working, I told them how I believe writing takes courage, and that sometimes, the stories that are hardest for us to tell are our most important stories, and the ones we really need to tell. And as I explained to Samuel, if it gets too hard to write, change things up. That's what fiction writers do. It's the feelings that have to be real.

So... if today's blog entry was a little more intellectual than my usual blog entry, it's not my fault. Blame those enriched students at Rosemere -- for being so smart. Special thanks to my friend, Rosemere High teacher Ms. Lawrence for arranging my visit, and for coming to hear me speak for the one hundredth time and not being bored. Thanks also to Ms. Enea and Ms. Fazia -- and to all the students.

The Meilleur Kind of Travail Together
Re-writing is Writing! Back at McCaig Elementary.....